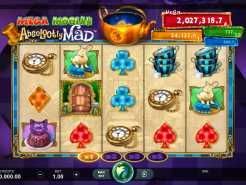 Play Now
Absolootly Mad: Mega Moolah Slots is the last of a series from Microgaming that allows players an opportunity to win from one of four progressive jackpots that are literally life-changing and in the millions of dollars. The slot game gives you a kind of Alice in Wonderland feel and offers five reels with 243 pay lines. There is a slew of added features too! Look for scatters, rolling reels, free spins, and multipliers. The top wager is $50. Play on your desktop or mobile device.

Like the fairy tale, symbols include a Butterfly Cupcake, a Cheshire Cat Cake, a Magic Door, the Mad Hatter, a Pocket Watch, a Teacup, and a Rabbit Cake, along with the four suits of a typical deck of cards. The Mad Hatter is the slot wild symbol and can be swapped out for any other symbol but only shows up on the middle three reels. It also pays 10x your wager when five show up. The scatter symbol is the Magic Door and how you activate the free spins feature.

The free spins feature begins when you get three of the Magic Doors on the first three reels. Win 8 spins that can be retriggered and during each of those spins, the multiplier will continue to grow from 3x up to 15x. There is a Rolling Reels bonus added. In this, during every winning combo, the symbols that generated that win would vanish and be replaced with new ones, offering the chance for an additional win.

It is the Mad Hatter symbol that makes the magic happen. Every time you spin one of these wild symbols, they will be added to a Golden Teapot at the head of the screen, but once that symbol creates a winning combination. The Rolling Reels feature can trigger the Jackpot Bonus game, which is how the four progressive jackpots are won. These include a mini pot that starts at $10, a minor that promises to be no less than $100, a major that pays at least $10k, and the big one, the mega, where you would win at least one million bucks. The massive wins in the Mad Hatter slots include three recent wins of more than $14 million, $4 million, and $3 million between June 2021 and September 2021.
Play Now